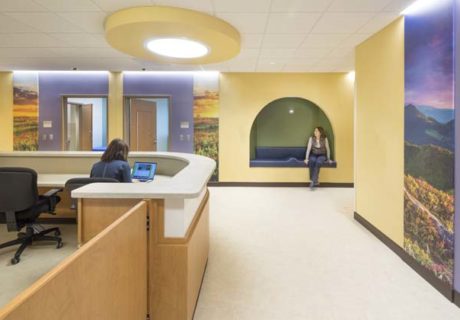 In 2015, Mind Springs Health’s West Springs Hospital in Grand Junction, Colo., began planning a 62,000-square-foot expansion. A visioning session early in the design process adopted the slogan “Creating a Place of Sanctuary” that would become the guiding principal for the design process of the 48-bed addition (with future planned expansion to 64 beds), which replaces an existing 32-bed inpatient facility in Grand Junction. This building opened in December 2018 and greatly expands access to psychiatric beds in the community and surrounding area as the only psychiatric hospital in the 520-mile- wide distance between Denver and Salt Lake City.

The project team, including Davis Partnership Architects (Denver) and Behavioral Health Facility Consulting LLC (Topeka, Kan.), set out to create a place that is comforting and non-threatening to allow those seeking treatment to relax and be open to treatment. This environment contrasts with those in jails and prisons, where some homeless mentally ill people end up these days.

Initial planning meetings were held between West Springs Hospital staff members, Davis Partnership Architects, Behavioral Health Facility Consulting, and many groups including a peer group consisting of former patients of the existing facility. The participants contributed input about what it’s actually like to live on a unit and the essential elements they wanted to see in the new design to allow patients to retain as much self-worth and autonomy as possible. These elements can be easily overlooked, disregarded, or written off as not safe enough for mental health environments during the design process, but the project team committed to making them a priority for the new West Springs Hospital project.

Two of the basic principles identified in the peer group sessions were the desire for plentiful natural light and direct access to the outdoors for all occupants. This led the design team to a strong preference for a single-story building solution, which was challenging because the site was tight and the building would take up more open space than a two- or three-story building. However, skillful site design and space planning, including the decision to delay construction of the fourth 16-bed unit until the new building was completed and one existing building could be razed, allowed the retention of the following essential design elements:

The new facility incorporates large expanses of security glazing between patient areas and four interior courtyards as well as the main entrance lobby. This was made possible by increasing the ceiling height of the day rooms to 18 feet and adding clerestory windows in the main corridors and other internal spaces to bring natural light further into the facility. The one-story solution also allowed typical patient rooms and corridors to have 9-foot-high ceilings.

The ability to allow patients to go outdoors in all seasons was considered highly desirable, as well. Twenty-foot-tall building walls surround the outdoor courtyards and eliminate the need for prison-like fences. Four separate outdoor courtyards are provided, and each is equipped for a specific function and range of activities related to the indoor room from which it’s directly accessible. For example, the courtyards that are accessible from the patient units are readily observable from the care team stations and include paving materials, planters, and furniture appropriate for use during both structured and unstructured times such as lounging, walking, and conversations. The courtyard accessible from the gymnasium has a basketball goal and space for other physical activities, while the dining room and art room share a courtyard on a scheduled basis, with tables and seating appropriate for these uses.

The hospital administrators felt strongly that access to a comforting environment started at the front door. To create a space that would be calming to everyone who entered, the main public entrance was designed to have the look and feel of a residential living room, including a fireplace and comfortable seating arranged in small groupings. These same concepts were also implemented, to the extent possible, in the separate crisis entrance, which allows those who arrive in a more agitated state to go directly into the crisis care center. The availability of a separate entrance for these patients provides privacy in a time of need and keeps possible disruptions from occurring in the main lobby. The separate entrance for ambulances and law enforcement officers isn’t visible from the patient entrances but also has direct access into the crisis care center.

Noise reduction, another priority on the peer group’s list, was addressed early in the design process, when specific design features are easier to accommodate. Here, units were limited in size to 16 beds with bedrooms arranged only on one side of the corridor to reduce the number of patient rooms on a corridor by half and eliminate the opportunity for cross-talk of patients on opposite sides of the corridor. Another design solution was the provision of glass-enclosed chart rooms for staff to allow both observation of the unit as well as confidential conversations, especially at night, that will not be readily heard from the bedrooms.

People being admitted to a mental health facility are often in different levels of distress and find themselves suddenly in an unfamiliar environment with other people they don’t know, some of whom may be acting very strange or even threatening. The ability to separate patients by diagnosis or acuity can be extremely helpful to everyone present and was achieved at the new facility through the creation of subunits. Within the hospital’s three, 16-bed units (two for adults and one for adolescents), a subunit is provided within each to allow flexibility as needed depending on the milieu. In addition, two patient flex rooms and two flex consulting rooms are available to give staff options to manage the environment.

The staff have found creative ways of using the subunits that the design team didn’t envision. For example, on one occasion when the census was low on the 16-bed adolescent unit and the adult units had a waiting list, the adolescents were moved to a subunit so that the additional adult patients could be located in the adolescent space until needs changed.

Additionally, comfort rooms are provided on each unit where individuals may choose to enter when they feel themselves escalating or becoming anxious. The rooms feature a bean bag chair or yoga mat and materials to assist patients with coping skills and meditation as well as quiet time and relaxation. Colored lighting also has been incorporated into these rooms to allow patients to select a color and then relax in the room. Staff are tracking the mood of individuals before and after they leave the room and find that 86 percent of patients report positive impacts from utilizing the color therapy. A similar color therapy room is available for staff use near the staff entrance to the building.

During the planning meetings, many former patients shared the importance of being able to get a drink of cold water without having to interrupt staff. Drinking fountains have been disappearing from behavioral health units in recent years because of increasing focus on infection control and ligature-resistant design measures. This is one example of how designers and providers can get so engrossed in the details of trying to eliminate every possible safety issue that they lose sight of providing for patients’ basic needs, such as getting a drink of water. Late in the design process, the project team realized that this important element hadn’t been included so they added a water dispenser in the day room of each unit. This solution allows supervision by staff and enables patients to get a paper cup and safely dispense the water themselves, allowing more personal dignity to satisfy their own basic needs.

The peer group provided invaluable insights to the design team on how the multitude of design decisions, both large and small, that are made on every project have profound impacts on patients’ experiences during their stay.

The degree of success in implementing the project’s guiding principle, “Creating a place of sanctuary,” can possibly best be summarized by feedback from a staff member soon after the facility opened: “On patient moving day, a male patient moving from the old hospital into the new one stopped, began looking at the new space, and started to cry. The nurse with him asked him why and he told her it was because he was so shocked at what a beautiful place we had built for him and others like him who need hospitalization and psychiatric help, that he didn’t think anyone really cared about people who need help, and he was grateful for what we had done. Recovering his composure, he expressed the desire to get well so he could work for us one day.”

Jim Hunt, AIA, is founder and senior consultant of Behavioral Health Facility Consulting LLC (Topeka, Kan.). He can be reached at jim@bhfcllc.com. Kim Boe, is executive vice president of West Springs Hospital (Grand Junction, Colo.). She and can be reached at kboe@westspringshospital.org. Robyn Linstrom, AIA, EDAC, LEED AP is senior associate of Davis Partnership Architects (Denver). She can be reached at robyn.linstrom@davispartnership.com.