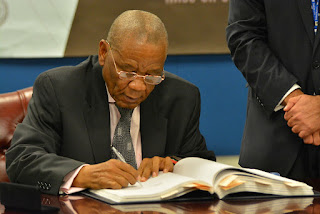 Thomas Thabane, Lesotho’s Prime Minister announced his resignation on Monday (May 18, 2020) and  put an end to the months of political uncertainty gripping the kingdom since he was accused of  his ex-wife’s murder.

Thabane’s political rivals have increased pressure on the prime minister to step down early over allegations that he had a role in the 2017 shooting of his ex-wife Lipolelo Thabane, whom he was going to give divorce.

His coalition was disbanded in parliament last week and he had been expected to resign by May 22, when a new government is due to be installed.

he decided to personally come and inform that he is stepping down as prime minister of Lesotho.

The 80-year-old did not state when he would formally quit but government spokesperson Nthakeng Selinyane said the premier would officially “announce his resignation” in an address to the nation on Tuesday.

Thabane added that it is rather difficult to part ways with something that you had been accustomed to and leave people behind, but we all have to leave at some point.

For the time being, Thabane who will clock 81 by May 28 will remain leader of his ruling All Basotho Convention (ABC), he said.

Thabane was entitled to be in the chair for upto 2022 but he had already put himself a target to vacant his seat by July 31 this year due to his advancing age.

Lesotho has been facing political instability since the start of the year 2020, when police said they found Thabane’s mobile number in communication records from the scene of his ex-wife’s murder.

The evidence made rivals within and outside Thabane’s party to demand his immediate resignation and get off the post of the Prime Minister of the nation.

Lipolelo Thabane who was 58 years old was shot and killed outside her home two days before her husband’s Thabane’s inauguration ceremony in July.

The murder sent shock waves through Lesotho- a tiny landlocked nation of 2.2 million with a history of political turmoil.

Thabane has denied involvement in the killing.

His current wife Maesaiah Thabane who is 43 years old whom he married two months after his wife’s Lipolelo’s death, is considered a culprit and a supporter of his husband Thabane in the murder case.

She has already been charged with murder and is out on bail.

Thabane’s government collapsed after his coalition partners pulled out their support over his repeated refusal to leave office earlier than stated.

The ABC and main opposition Democratic Congress party have nominated Finance Minister of the country Moeketsi Majoro as the new Prime Minister of Lesotho.

The supreme traditional leader of Lesotho, king Letsie III was advised by his council on Monday to appoint Majoro as the new prime minister, his senior secretary Monehela Posholi said in a statement.

National executive committee of ABC is expected to hold a special conference in July to elect a new party leader.

While no Prime Minister has served out a full five-year term in Lesotho over the past decade, the Thabane said in an interview last week that he has set an example to fellow leaders of Africa who have a eagerness to cling to power.

He said that he is trying to set a standard that leaders in Africa must volunteer to leave when they think it’s time to leave or at the very worst they must leave when their term ends.