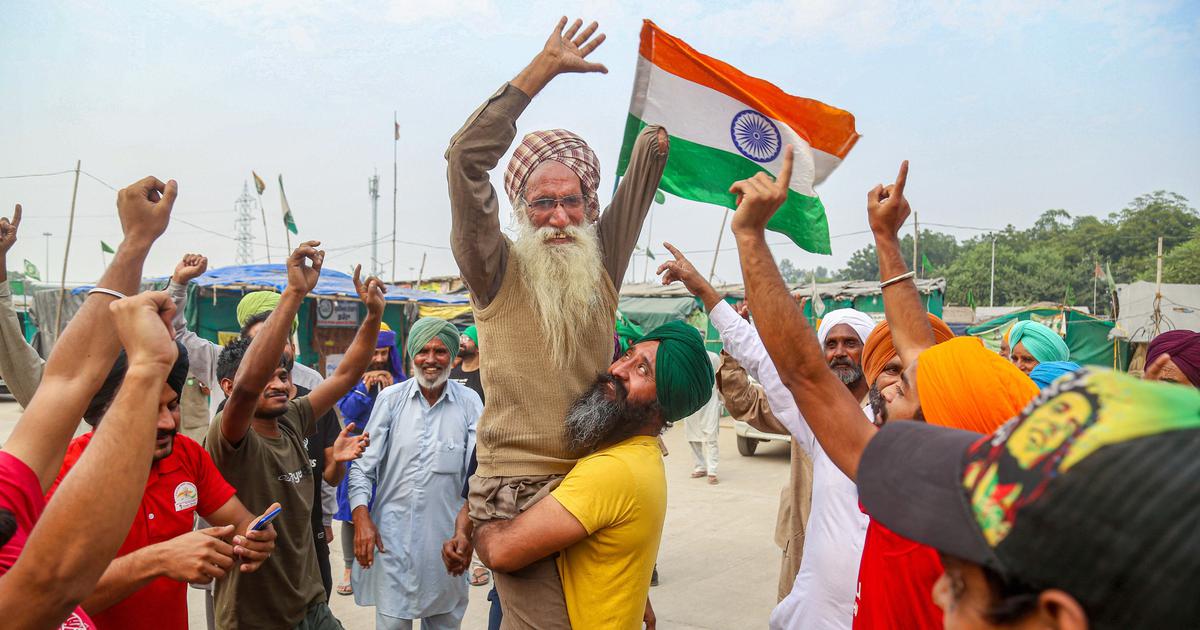 Free-market economists supported the now-withdrawn farm laws in the belief that they would augment incomes and productivity. Left-leaning economists opposed the farm laws in the belief that they would make cultivators vulnerable to the whims of big business. For this writer, however, the problem with the farm laws was not so much their content, but the deceitful manner in which they were drafted and passed. In every which way, their enactment into law and the harshness with which the protests by farmers were subsequently met were gross violations of democratic procedure and practice.

The Constitution of India lists agriculture as a state subject. And, yet, so far as one can tell, the three farm laws were drafted without any consultation with the states, not even with states ruled by the Bharatiya Janata Party. Indeed, knowing how this government functions, it is very likely that all the drafting was done in the Prime Minister’s Office, with little or no input from cabinet ministers, not even from the Union minister of agriculture.

Unilaterally making decisions which affect hundreds of millions of Indians has been a hallmark of the Narendra Modi government since it took office in May 2014. However, a top-down, one-size-fits-all framework is particularly unwise in a field such as agriculture, given the enormous ecological diversity of our very large country. When soil types, water regimes, cropping practices and land tenure histories vary so much between and within states, how could the prime minister go ahead with such a controversial measure with no discussions with the states at all?

When the farm laws were taken by the government to Parliament, they were, likewise, rushed through with scant regard for democratic norms. Given that they would have such far-reaching effects, the sensible (as well as wise) thing would have been to refer the laws to a parliamentary committee, which would have called in domain experts to discuss the laws in detail and help in refining and improving them. That this precautionary measure was not undertaken was, again, characteristic of this regime.

The BJP’s comfortable majority in the Lok Sabha meant that these laws passed easily in that chamber. But then they reached the Rajya Sabha, where the BJP was unsure that it commanded majority support. Here, the Opposition was better represented and hoped to debate the matter thoroughly, but was prevented from doing so by the deputy chairman of the upper House, Harivansh Narayan Singh, who, in an act altogether unworthy of his office, did not allow an actual vote on the matter, using the subterfuge of a “voice vote’’ to (spuriously) claim that the majority approved of the laws.

It was the secrecy with which these farm laws were drafted and the haste with which they were passed that aroused such widespread resentment among the farmers of northern India. Had there been a transparent and open discussion with the agricultural ministers of states, had the stakeholders’ inputs been taken account of in the drafting of the laws, had Parliament been permitted to debate the issue carefully, perhaps the outcome may have been very different.

The farmers’ anxieties were further intensified by the fact that corporate houses like Ambanis and Adanis were aggressively moving into the agricultural sector. Thus, as one commentator wrote earlier this year, “Given the nature of the farm laws, it is a straightforward conclusion that the Adani Group is well positioned to take advantage of them.” (Hartosh Singh Bal, “Mandi, Market and Modi”, The Caravan, March 2021).

The passing of the farm laws was a manifestation of the Modi government’s contempt for the federal structure of the Republic and for Parliament itself. Since the normal channels of democratic representation had been so thoroughly bypassed by the prime minister, the farmers now took to the path of satyagraha. They assembled in their numbers outside the borders of the capital, New Delhi, lived and slept under the open sky, and sang and told stories to keep themselves going.

The protests were admirably non-violent, and yet they were met with a savage response from the Union government. Those marching to join the protests were met with water cannons, spikes on roads and internet shutdowns. This direct repression by the state was complemented by a campaign by the “godi media’ characterising the farmers as Khalistanis in disguise. Union ministers and BJP MPs enthusiastically participated in this demonisation, claiming that the protesters had been infiltrated by Maoist elements, that they represented the “tukde-tukde gang”, that they were supported by China and Pakistan and so on, these allegations then being amplified by the ruling party’s troll army.

The satyagrahis were undeterred. Several hundred farmers died from illnesses picked up in the course of their struggle. And yet they continued to gather in ever larger numbers. The government was now compelled to convene a series of meetings of farmers’ leaders with Union ministers, although the prime minister himself would not grant them an audience.

In the year they sat stoically outside the imperial capital, Narendra Modi’s only public reference to the satyagrahis was to mock them in Parliament as “andolan jeevis”, those who thrive on protests. He perhaps hoped that the protests would fizzle out. But they didn’t. Eventually, with assembly elections in five states around the corner, and the BJP vulnerable in several of them, the prime minister went on air on the morning of Friday, November 19, to say that the farm laws would be withdrawn.

The announcement came at around the 15th minute of a 17-minute speech, being prefaced by a long peroration about how through five decades in public life, the prime minister had apparently devoted himself to the cause of the farmers above all else. Nonetheless, that he reversed the decision is significant, for this may be the first occasion on which Narendra Modi has expressed contrition for making other people suffer through his actions.

Recall that after the pogrom of 2002 that occurred under his watch as the chief minister of Gujarat, Narendra Modi was unrepentant at the time. Several years later, when a foreign journalist asked him about the matter, he compared the fate of people (mostly Muslims) who had died in those riots to a puppy who accidentally comes under the wheels of a car. Of later episodes of human suffering for which he has been even more directly responsible, he had said nothing at all. For instance, he has not expressed any sort of remorse for the demonetisation of 2016, which ravaged the Indian economy and ruined the lives of millions of people. So for Modi to say, “Main kshama chahta hoon [I seek your forgiveness],” as he did on Friday, was a radical departure from past practice.

When, on another November day five years ago, the prime minister went on air to announce that Rs 500 and Rs 1,000 notes were withdrawn, some political observers speculated that among the unstated motives for this measure was to aid the BJP in a forthcoming assembly election in the country’s most populous state, Uttar Pradesh. The move, it was argued, would destroy the cash holdings of parties opposed to the BJP. That last Friday’s announcement is also directly linked to a forthcoming Uttar Pradesh election is even more likely. The farmers of western Uttar Pradesh have participated in large numbers in the protest, and their votes could play a critical part in which way the election goes.

I see from my Twitter feed that some enthusiasts for the farm laws are grumbling that their withdrawal is “a significant setback for the country”. That verdict is premature. Even among economists there is no consensus on whether the farm laws as they stood were drafted well or carefully enough. Moreover, even if the ends were allegedly noble, they do not justify the altogether ignoble means by which they were sought to be reached.

This article was first published in The Telegraph.