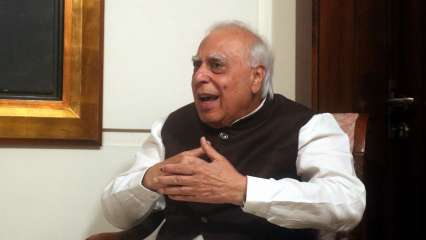 With the political turmoil in Punjab Congress intensifying, senior party leader Kapil Sibal on Wednesday asserted that they are unaware of who is taking the decisions in the party as there is no president.

“In our party, there is no president so we don’t know who is taking these decisions. We know and yet we don’t know,” said the Congress leader in a press conference today again raising questions on the delay in the election of the party president.

A delegation of 23 members (G-23) of Congress last year wrote a letter to the party’s interim president Sonia Gandhi demanding a slew of organisational reforms.

“We are not “Jee Huzoor 23″. It is very clear. We will keep talking. We will continue to reiterate our demands,” Sibal said while expressing resentment over the functioning of the party and said it is ironic that those who were considered to be close to the high command have left them and the others are still standing by.

Speaking about the letter written by the G-23 leader, he said that they are waiting for actions to be taken with respect to electing the guard of the party.

“I’m speaking to you (media) on behalf of those Congressmen who wrote the letter in August last year and are waiting for the actions to be taken by our leadership in respect of the election of the office of the president, to Congress Working Committee and central election committee,” he said.

Congress on Tuesday witnessed a dramatic turn of events after Navjot Singh Sidhu tendered his resignation from the post of Punjab Congress chief. Soon after, three other leaders and a minister of the state also submitted their resignation to the top leadership.

“We (leaders of G-23) are not the ones who will leave the party and go anywhere else. It is ironic. Those who were close to them (party leadership) have left and those whom they don’t consider to be close to them are still standing with them,” said Sibal.

Reflecting on the ongoing turmoil within the party, Sibal said that the party must remain united.

“A border state (Punjab) where this is happening to Congress party means what? It is an advantage to ISI and Pakistan. We know the history of Punjab and the rise of extremism there… Congress should ensure that they remain united,” he said.

He further said, “Every Congressman of the country should think as to how the party can be strengthened. Those who have left should come back because Congress alone can save this Republic.”