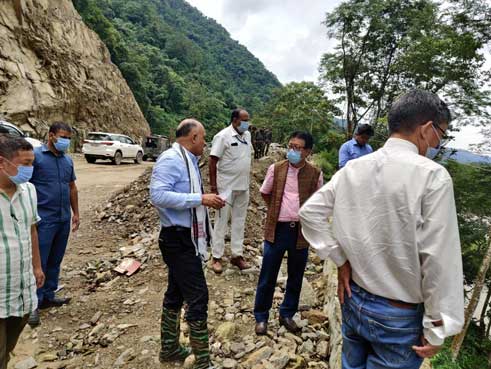 YAZALI, 2 Sep: Chief Secretary Naresh Kumar, who was on a daylong visit to Yachuli constituency in Lower Subansiri district, has assured to facilitate and promote adventure tourism in the peripheries of the Ranganadi Hydroelectric Project (RHEP), the NEEPCO and Yazali.

The chief secretary, along with Tourism Secretary Sadhana Deori, Transport Secretary Dani Salu, Tourism Director Abu Tayeng and officials of the district explored the feasibility of developing adventure tourism in the area.

Education Minister Taba Tedir, who is also a local MLA, accompanied them during the visit. They visited the view point at the Potin organic tea garden to have a view of the areas where amenities for adventure tourism are proposed to be created. The scope for setting up a ropeway was considered from the hillock.

The team then visited the defunct tourist lodge on the left bank of the NEEPCO dam to assess the possibility of restarting the resort built by the tourism department. Sanctioned in 2009 and built in 2013, the resort still stands strong. The chief secretary invited young entrepreneurs to take up renovation of the building and run it on lease. The team also visited Tago Putu, which is an elevation used for paragliding takeoff.

The CS interacted with paragliding pilot Joram David, who has been conducting paragliding events in the area.

Expressing appreciation for the young entrepreneur, who has been procuring paragliding equipment on his own, the CS assured to help him in procuring equipment. He further asked the tourism department to prepare a holistic plan for tourism activities in the area as early as possible.

Later, speaking to the press, Kumar said that Yazali, being near the state capital, has the potential to emerge as a major tourist destination. “It has everything in offer for tourists, like adventure sports, cultural heritage and stunning natural beauty. We will take up various tourism projects in Yazali. Once the Hollongi airport is ready, the importance of Yazali as a tourism destination will be manifold,” said the CS.

He assured to revisit Yazali after a few months to follow up on the various projects that will be initiated by the tourism department.

He also said that the organic items produced in the Yazali area can be supplied to various parts of India if the market is properly tapped.

Tedir while expressing gratitude to the CS and his team for visiting and exploring the tourism potential of the area expressed hope that the outcome of the visit would be fruitful. “People have massive expectations from the visit,” he said.

The minister informed that he regularly conducts meetings to review the progress of the Trans-Arunachal Highway project in his constituency.