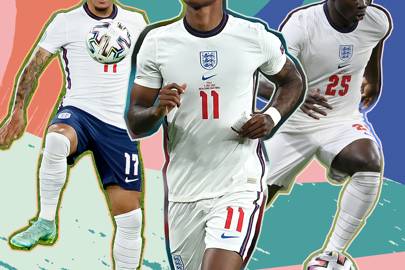 As I wandered through central London yesterday, I saw people of all colours and creeds from across the country singing “ENGERLAND! ENGERLAND!” Donning my England shirt, I felt pride – I’d never felt more English. After a time of such division and hostility in British society, after a time of darkness during the pandemic, it was a rare moment of unbridled joy and togetherness.

Because being a Black Brit in the UK over the last few years especially has been difficult. There was the Windrush scandal, the government have tried to erase blatant institutional racism, Black people have died at much higher rates from Covid-19 than white people, and 75% of Black Brits don’t believe their human rights are as protected as white people’s.

To women like me, the England team provided a reprieve from this toxicity; they were oxygen.

In order to see this embed, you must give consent to Social Media cookies. Open my cookie preferences.

When I arrived at the pub and the game started, the room was buzzing. An England goal straight after kick-off was such a moment of hope – but an Italian equaliser and a gruelling 120 minutes brought penalties. And when I watched Marcus Rashford, Bukayo Saka, and Jadon Sancho miss theirs I felt disappointed – but mostly felt dread. I turned to my friends, and said: “They’re going to get so much racist abuse tonight.” It was gutting, after such a magical Euros, that it would end with racism and vitriol.

I mentally prepared for the droves of racists to take to social media and say that Black athletes didn’t belong; that people that looked like me didn’t belong. The sense of unity felt like it was gone, and I began to wonder how many people I’d celebrated with in the street earlier that day might have turned to racial abuse later that night when we lost. This was far worse than losing any tournament.

In that moment, I was acutely reminded of how Black players are lauded when they win, but dehumanised when they don’t. Take Raheem Sterling, England’s top goal scorer this tournament. Before the tournament, he had been demonised in the tabloids – once he started scoring goals, they warmed to him. But even then, Harry Kane was seen as the star boy – despite Sterling virtually carrying England to the final.

In a beautiful letter ahead of the game with Italy last night, called “It Was All A Dream”, he spoke to England and about the tabloids. “So can I trust you? Can I tell you my story, and will you really listen?” he wrote. “If you read certain papers, maybe you already think you know me. Maybe you think you know my story, and what I care about. But do you really?”

And the sad reality is that he, and players like him, cannot.

When Rashford, Saka, and Sancho missed those penalties it wasn’t just their ball missing the net closing the door on being European champions – it was the opening of a door of a wave of abuse. Because for racist England fans, Black people can’t make mistakes – if they do, they’re sub-human.

Rashford, a national hero that has raised hundreds of millions for hungry children, had his mural in Manchester defaced. Saka and Sancho, two exceptional players, faced a litany of racist abuse across social media. These lads are just 23, 19, and 21 respectively. Seeing all this makes my heart ache, it makes me furious – it reminds me that it could have been my brothers up there missing that penalty and getting this racial hatred.

Rashford has regularly spoken out against the racist abuse he gets on social media, and earlier this year he took to Twitter to express his distress. “I’ve been playing this game from the day I could walk,” he said. “I’m built for criticism of my performance but I can’t accept the ape, monkey, baboon, banana, jungle talk.” He added: “As a United fan myself, it’s really difficult stuff to read. And I can only think about how this would have made me feel as a seven-year-old reading it. How would I ever have any faith in humanity?”

But for a Black player, it’s a different story.

If Meghan, with all her privilege, is not believed, what hope is there for Black women who continue to suffer in the face of prejudice, racism and misogyny?

If you miss a penalty, you’re told England isn’t your home. You’re told to leave. People call for you to be deported. You’re called a n*gger, a monkey, a w*g. And it doesn’t matter how exceptional you are, if you are Black and don’t give these racists what they want, if you aren’t pitch perfect, then you’re nothing. Black people’s humanity and worth should not be decided on whether or not they score goals for England. Black players shouldn’t be told this isn’t their home when they set a foot wrong.

In many ways, it echoes the colonial era – a time when Black people were seen as below white people but sources of entertainment. And inevitably the abuse spreads beyond the players, with anecdotal stories on social media of Black people being abused on and offline after the game.

The England team provided a moment of national unity and memories that will last a lifetime this summer. Now, we must have a moment of national reflection on what sort of country we want England to be for future generations. I want my football-mad five year old brother to dream of playing for England one day, and not feel like he’s less English because of the colour of his skin if he gets there. I want Black kids up and down the country to feel that they belong, and that they aren’t less than. I want them to be secure in knowing England is our home.