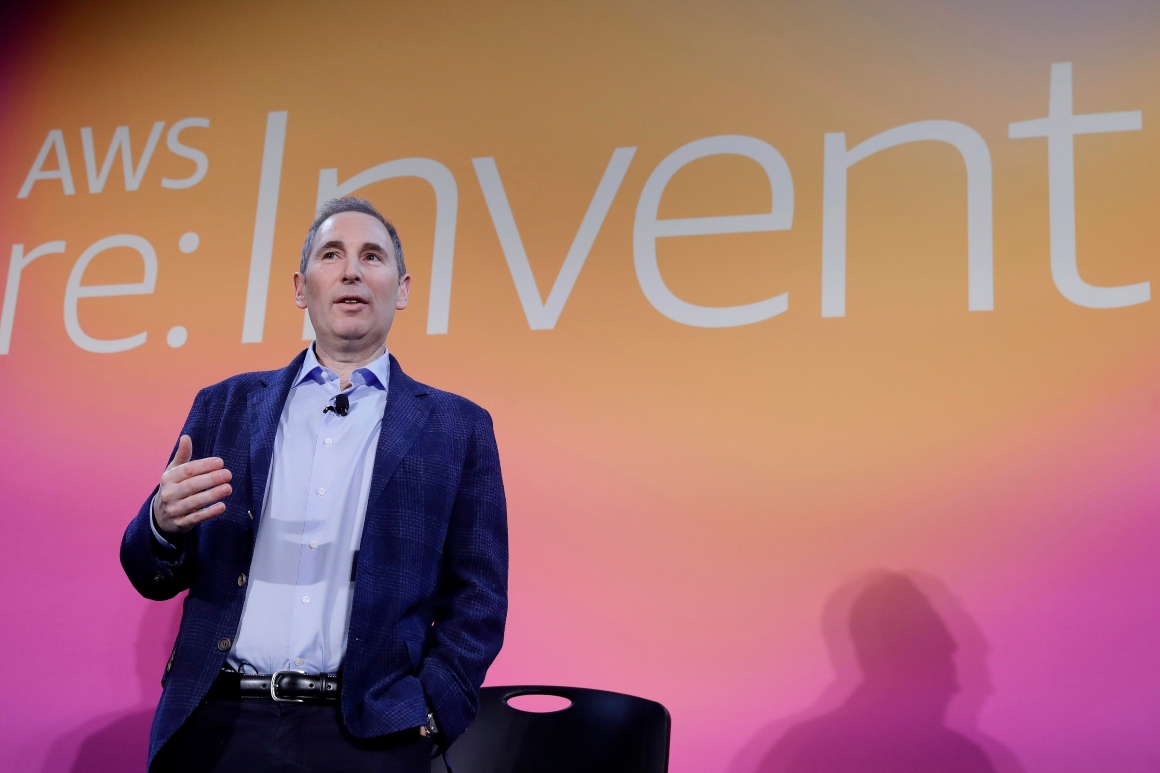 Amazon’s new CEO Andy Jassy is about to inherit plenty of legal trouble, and a big chunk will come from Europe.

As the former head of Amazon Web Services takes over from the company’s founder, Jeff Bezos, POLITICO has reviewed seven of the most pressing threats to the larger business and evaluated their severity.

On competition, Jassy faces a two-front war, in Brussels and national capitals. On one side, he faces an advanced probe brought by the EU’s competition chief Margrethe Vestager. She has charged Amazon with using third-party seller data to boost its own offerings, but is also looking into logistics and delivery services — similar practices are scrutinized in Italy.

On another side, Jassy is facing fire from national authorities in Germany, Spain and the U.K. The most advanced probe, by Germany’s cartel office, looks into the influence Amazon wields over pricing, as well as a deal with Apple to exclude non-authorized dealers from selling Apple products on the platform — an arrangement that Spain is looking into as well.

Meanwhile, he also ought to be concerned about new EU rules meant to tame how companies like Amazon do business, and could become law by 2023. The rules, known as the Digital Markets Act, will set a list of what the biggest companies, called gatekeepers, can and cannot do. The U.K. is setting up a similar regulatory regime and Germany already has its own version in force since January.

It’s likely Amazon will be targeted by the EU as a”gatekeeper,” with European Parliament members trying hard to include even more of the companies businesses — like the voice assistant Alexa — in the scope of the regulation.

How worried he should be: Very. It will be very difficult for Jassy to keep dodging antitrust fines — unless the company’s battalion of lobbyists and lawyers succeed in derailing the process.

2. Cleaning up the online marketplace

European lawmakers and regulators have vowed to crack down on the sale of illegal and dangerous products on online marketplaces — Amazon chief among them.

In the EU, restrictions are being woven into a new EU law on content moderation that will force companies to verify the identity of third-party sellers on their platforms and run checks on the products that are sold. Failure to comply mean stiff fines from regulators as well as lawsuits brought by consumers.

In the U.K., Amazon is facing an investigation from the U.K.’s market regulator about whether it has done enough to clamp down on fake reviews on its website.

Additionally, Brussels last week introduced new legislation on product safety that partly targets online marketplaces with measures like time limits on how quickly they must remove dangerous products from their websites. Consumer groups and policymakers say they want the rules to be even stricter.

How worried he should be: Very. European lawmakers are not turning back.

A POLITICO investigation revealed poor management practices that could have placed the data of millions of people at risk. And Amazon could be charged with potential violations of the EU’s privacy code, the GDPR. Luxembourg’s data protection authority has launched an unrelated investigation into the company, which could result in Europe’s largest-ever fine for a privacy violation.

EU leaders and regulators are also eyeing Amazon with suspicion over its role as a holder of data. The highly profitable Amazon Web Services business, which Jassy ran before he took over the whole company, does business with governments and corporations around Europe. Critics say that makes the data vulnerable to snooping by the U.S. government, which has the legal means to seize Europeans’ data.

With legal transfers of European personal data to the U.S. in limbo, the regulator responsible for enforcing the GDPR in the EU’s institutions opened an investigation into how they transferred data to the United States using Amazon’s services.

Beyond personal data, the bloc wants to protect its industrial data, which it sees as the key to boosting digital innovation in the bloc. Brussels, Paris and Berlin are considering new laws and initiatives that could undermine Amazon’s dominance in cloud services and bolster European alternatives.

How worried he should be: Not very. Even the highest GDPR fine would seem small in comparison to Amazon’s yearly profits. Its cloud services also remain the most widely used in Europe. It is hard to see where a real European alternative could be coming from.

Artificial intelligence is Amazon’s secret sauce. It powers its near-magical recommendation algorithm, helps its logistics machine run like clockwork and monitors the efficiency of its workers.

In April, the European Commission proposed the world’s first AI law that bans or restricts AI that poses a risk to humans. Many of the ways Amazon uses AI will likely face stricter restrictions — but to what degree will be determined by how negotiations between the European Parliament and EU member countries pan out (and how effectively Amazon lobbies both.)

The new rules could require the company, ordinarily tight-lipped about its algorithms, to be more transparent about how it applies the tech to its workers. Under the new rules, the use of AI in labor management will be classified as “high risk” and will have to go through stricter screening before entering the EU market.

Amazon has imposed an “indefinite” moratorium on the sale of its facial recognition technology to U.S. police departments, but has not stopped selling the tech to other customers. Amazon has been criticized for creating one of the world’s largest civilian surveillance networks with its Ring home security system. To avoid public opinion turning against Amazon, the company will have to convince lawmakers its systems will not offer a backdoor for mass surveillance.

How worried he should be: The European Commission’s proposed rules have given Europe’s unions more ammunition to fight Amazon’s worker surveillance practices — expect it to get messy.

Global companies face an overhaul of the way their taxes are to be collected worldwide. Thanks to France, Amazon is one of them.

Amazon could have escaped the global tax agreed by 130 countries this month, as the levy will apply to the largest corporations whose profit exceeds a 10-percent margin ,and Amazon’s profit margins are often below that threshold.

But French Economy Minister Bruno Le Maire very much wanted the Big Tech company to be covered. The final rules, negotiated specifically to make sure Jeff Bezos’ company does not fall through the cracks, allow for the calculation to take into account the profits of specific business units, like Amazon Web Services, which has higher profit margins than other parts of the company.

Now, more questions await Andy Jassy. One is how and when EU countries will implement the new global tax. Another is whether the European Commission will come up with its own tech tax in July as planned, and what it will look like if it does.

Jassy will have to worry about whether European countries who have a national digital levy, such as France, Italy and Spain, will scrap them when the global deal is implemented — as requested by Washington.

How worried he should be: The company can afford a tax hike. Amazon may have to rethink the way it pays its taxes, but the tech company will always be able to count on the U.S. administration’s support to fight back against local levies.

A murky track record on workers’ rights is catching up with Amazon, as the company’s treatment of its delivery drivers and warehouse workers is criticized by Europe’s trade unions and labor-focused MEPs. Allegations abound of workers having to pee in plastic bottles while on the job to keep up with the pace of work, and of its courier drivers being fired via algorithm.

The timing of the backlash isn’t great, as the European Commission gets to work on its upcoming proposal on gig workers’ rights and zeros in on how self-employed workers (like Amazon’s Flex drivers) are missing out on social protections and labor rights.

Bezos skipped out on a hearing from the European Parliament’s employment committee on its labor practices. “Neither Jeff Bezos nor any representative followed our invitation. They fear an anti #Amazon tribunal,” tweeted EPP’s MEP Dennis Radtke in response, adding: “So balls out of stock at the moment Mr Bezos?” It’s Jassy’s problem now.

How worried he should be: He should keep an eye on it. The public scrutiny isn’t about to disappear any time soon, but the substance of the Commission’s upcoming proposal is yet to be seen: Jassy will looking out for it later this year.

Amazon is a a co-founder of The Climate Pledge, a commitment by over 100 companies and organizations to become “net-zero carbon” by 2040. But that pledge won’t cover Amazon’s less eco-friendly practices, like the destruction of millions of items of unsold stock every year, as per an investigative report last month by British broadcaster ITV.

The report prompted the Scottish Environment Protection Agency to say it might launch a formal investigation into the company, while the U.K.’s Department for Environment, Food and Rural Affairs (Defra) issued a warning to industry, stressing that “failure to meet the legal obligation to take all reasonable steps to apply the waste hierarchy on the transfer of waste can lead to enforcement action.”

Earlier this year, the British government also said it was considering new measures to increase obligations for online marketplaces and retailers to take back unwanted or broken electrical goods. Plenty for Jassy to get his teeth into.

How worried he should be: Mildly. If France backtracking over including online marketplaces in the scope of its new climate bill is anything to go by, he doesn’t have too much to worry about yet in the way of hard regulation.