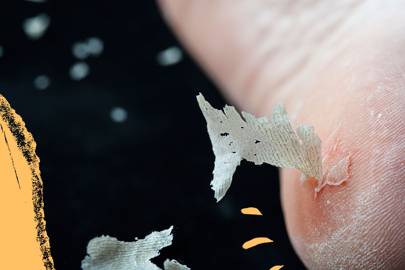 For years, Baby Foot was sort of the Big Foot of the beauty world. Although it launched in 1997, even beauty editors weren’t sure of its existence until well into the first decade of the new millennium. There was an urban-legend quality to it. Magic booties that transform your foot skin into that of a toddler? Could it be?

According to countless fans of the “Original Exfoliation Foot Peel” — it has nearly 25,000 five-star reviews on Amazon — it’s legit. Not only does it exfoliate what is arguably the most stubborn area of skin on the entire body, but it also does so in a way that provides a kind of morbid entertainment over the course of a couple of weeks, letting you watch your dead skin peel off in flaky, white sheets.

As a former kid who put glue on her hands just to peel it off and a long-time beauty editor, it was almost nonsensical that I’d gone this long without trying Baby Foot. But I finally did recently, and I decided to make it an educational experience by also reaching out to a few experts to figure out exactly what makes the extremity-specific exfoliating treatment so much more than just a novelty.

Baby Foot is an arguably legendary beauty product and, in the brand’s own words, an “innovative one-hour foot peel treatment [that] is similar to a chemical peel and will make your feet feel smooth and soft, just like a baby’s foot.” But it’s not just similar to a chemical peel. According to cosmetic chemist Ginger King, its main exfoliating ingredients make it exactly that.

“Lactic acid, glycolic acid, malic acid, and salicylic acid are common fruit acids for chemical peels,” King says of the exfoliators in Baby Foot. “This is a mix of alpha and beta hydroxy acids.”

According to Stacy Chimento, a board-certified dermatologist with Riverchase Dermatology in Miami, alpha hydroxy acids (AHAs) primarily exfoliate the skin’s surface while beta hydroxy acids (BHAs) penetrate further into the skin to remove dead skin cells. “When used together, AHAs and BHAs are able to make skin smoother, softer, and more even-toned.”

The Baby Foot process isn’t exactly the cutest or most intuitive, as I came to find out the first time I used it. Each pack comes with two transparent, plastic booties — not too hard, not too flexible — that are pre-loaded with the gooey, clear exfoliating formula. You seal them off at the ankles with the included tape, and to ensure that the substance fully surrounds your skin, it’s recommended that you put on your own socks over the booties. (I was going to do this anyway out of fear of slipping on my tile floor. Also, fashion.)

You keep the booties on for an hour, and after washing off the formula with soap and water, you’re treated to… absolutely no change. That’s because it can take several days for the exfoliation to really start kicking in — in a really apparent way.

The ultimate guide to exfoliating your way to gorgeous, glowing skin

“Foot peels are a form of chemical exfoliation, as opposed to the instant gratification you get from physical exfoliation,” says California-based board-certified dermatologist Azadeh Shirazi. “It takes a little while — three to seven days — for the dead layers to break down enough to detach from the layers underneath.”

And when they do start to detach, boy, do they ever!

One of the things that has made Baby Foot so popular is the fascinating yet kinda gross way it causes dead skin to peel off in ghostly, white sheets — or, in some cases, chunks — revealing smoother, softer skin underneath. The reason for that is twofold: the skin on the feet is thicker than pretty much anywhere else on the body, and therefore, the amount of exfoliating chemicals needed to make it peel is higher than it would be in exfoliating products made for anywhere else on the body.

“There’s often much more dead skin to come off on the feet as the stratum corneum — the top layer of the skin comprised of dead skin cells — is thickest on the foot, so there’s more to come off with peeling,” says Marisa Garshick, a board-certified dermatologist in New York City. Furthermore, she says, the feet are often neglected and take on a lot of wear and tear compared to the rest of the body.

Therefore, even if it has the exact same active ingredients as Baby Foot, slapping your favorite face peel on your feet isn’t going to do squat for such rugged skin. “The skin on the feet is thicker, and as a result, can tolerate higher strengths of exfoliating products when compared to the face and other parts of the body,” Garshick says.

Likewise, you wouldn’t want to scoop the goo out of your Baby Foot booties and put it on your face. It may seem like a powerful way to exfoliate your face, but Chimento warns against doing that. “The active exfoliating ingredients in Baby Foot are at too high of a percentage to be safe for use on the face,” she says, echoing that the soles of the feet are much thicker and more durable than other areas of skin. “If Baby Foot was to be applied to the skin on the face, it would likely result in red, inflamed skin.”

Shirazi agrees, explaining that the outcome could be even worse than just some redness. “If you put this same formula on the face skin, which has a thinner, more delicate outer layer, it can cause significant damage to the skin barrier, resulting in a chemical burn,” she says. Your feet, however, can take it like a champ.

I was looking forward to seeing my soles start to shed their mortal coil, and after about three days, there was a hint of flakiness — barely enough detachment for me to get a good two-finger grip on the dead skin to peel it off. And it didn’t get much wispier than that. I felt dejected, knowing I’d done everything right and still didn’t achieve the desquamatory delight so many Baby Foot users “enjoy.” What’s the deal?

The short answer: I didn’t have all that much dead-skin buildup to begin with. “Results will vary based on the thickness of the dead skin cells on the feet,” Shirazi says, noting that the more friction and pressure the foot endures, the thicker the dead layer will be. (I guess working from home on the couch for a year doesn’t really put foot skin to the test.) “Some will have more of it, so the peeling can be more dramatic and last longer — up to 14 days. The formula targets only the dead skin cells.” My feet were simply babyish to begin with.

So what if I wanted to try it again, just in case it was a flakeless fluke? The experts suggest I wait a little while. “Generally it is best to give the skin time to recover,” Garshick advises. “While they are safe to use whenever there is a buildup of dead skin, it is often recommended to use every two months.”

If sticking your feet in viscous, disposable acid pouches isn’t your idea of a good time, there are other ways to soften your feet.

“Foot files and callus removers look almost like smaller versions of cheese graters. These tools can be dragged across the bottom of the foot to ‘slice’ off dead skin,” says Chimento, who warns that it’s important to be gentle when using them in order to avoid cutting yourself or cause irritation.

Another form of physical exfoliation for the feet is the good old scrub. “A physical exfoliant such as St. Ives Apricot Scrub can be used one to two times per week on the feet,” Garshick says, also recommending Arm & Hammer Heels & Feet Moisturizer Plus Gentle Exfoliator.

Garshick is also a fan of lotions with a chemical-exfoliant component, like AmLactin Foot Repair, which contains lactic acid. Shirazi, on the other hand, likes a combination of chemical and physical exfoliation. “I suggest using a 20 percent urea foot cream overnight combined with a physical exfoliation technique such as a pumice stone to remove dead skin cells,” she says. “The urea will loosen the skin cells making the mechanical exfoliation more effective.” One of our favorites: Dr. Scholl’s Ultra Hydrating Foot Cream.